Kentucky Derby winner Medina Spirit failed a postrace drug test, once again raising questions about horse doping in the sport when the colt's blood sample was found to be in violation of the state's medication protocols for racehorses.

Rules in the state of Kentucky limits the use of the steroid to 14 days or more before a race. Any level of detection on race day is a violation.

If the violation is upheld after a second round of testing, Medina Spirit would be disqualified and second-place finisher Mandaloun named winner of the Kentucky Derby.

It's the latest high-profile drug violation in horse racing, which was rocked last year by the indictments of two trainers and 25 others in a far-ranging doping scandal. Changes are coming to standardize medication in horse racing after years, but a law passed by the U.S. Congress doesn't go into effect until next year.

Here's a look at how Medina Spirit got to this point and what's next:

Q. WHY IS BETAMETHASONE USED FOR HORSES?

A. It is a steroid used to reduce inflammation in the horse's joints and is not considered a performance enhancing drug. But it can give horses an advantage over those without betamethasone in their system who wouldn't feel the therapeutic effects while racing.

Kentucky limits the use of the steroid to 14 days or more before a race, so it clears a horse’s system before getting into the starting gate.

The Racing Medication & Testing Consortium says betamethasone is "a potent, long-acting, synthetic glucocorticoid widely used in equine veterinary medicine as a steroidal anti-inflammatory.” It's a man-made corticosteroid that can be administered topically but is far more often injected into a horse's joints.

The horse Medina Spirit won the 2021 Kentucky Derby on Saturday.

Q. HAS BETAMETHASONE BEEN FOUND IN OTHER BAFFERT-TRAINED HORSES?

A. It is the same substance found in Baffert-trained filly Gamine, leading to her disqualification from third place in the 2020 Kentucky Oaks. Baffert did not appeal that ruling. The trainer, who has denied giving the steroid to Medina Spirit, has cited contamination as a reason for this and previous violations.

Q. WHY DID MEDINA SPIRIT FAIL THE DRUG TEST?

A. Betamethasone is a Class C drug that is allowed in Kentucky as a therapeutic. But Medina Spirit's test results postrace violates Kentucky state law that limits the use of the steroid to 14 days or more before a race.

The penalty for a first offense for a trainer is a fine of at least $1,000, without mitigating circumstances. This would be Baffert's second betamethasone violation in under a year after Gamine.

Q, DOES BAFFERT HAVE A HISTORY OF DOPING HORSES?

A. Not with performance-enhancing drugs, though this is the fifth drug violation in the past 13 months for Baffert. Before her betamethasone violation in Kentucky, Gamine was found to have 185 picograms and Baffert-trained Charlatan 46 picograms of lidocaine during racing at Oaklawn Park in Arkansas last year, which carried a suspension that was appealed and overturned.

Another Baffert horse, Merneith, tested positive for the cough suppressant dextrorphan after racing last summer at Del Mar in California.

Earlier this year, the California Horse Racing Board allowed Justify remain the winner of the 2018 Santa Anita Derbyafter the horse was found in postrace testing to have scopolamine, which is sometimes used to treat mild colic and spasms and can also show up as a result of environmental contamination when horses eat hay that contains jimsonweed, which grows wild in California. 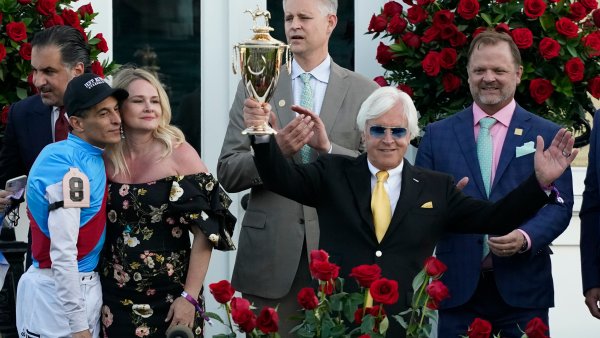 Q. HOW ARE HORSES TESTED AND HOW MANY HAVE TESTED POSITIVE THIS YEAR?

A. Mandatory postrace testing varies from state to state, so there is no centralized database record of how many horses have tested positive for betamethasone, other substances or performance-enhancing drugs.

There is a safety and integrity bill that was recently signed into law and goes into effect in July 2022 with the goal of implementing consistent, transparent and enforceable doping rules across all racing jurisdictions.

A. Baffert and Medina Spirit owners requested a second round of testing, a split sample from the colt. Using a split sample is a way of re-testing to verify the presence of the steroid. It could take beyond this week for the results of that sample to be analyzed, either clearing the record or leading to a DQ.

The plan as of Monday was for Medina Spirit and Baffert's Concert Tour to travel to Baltimore for the Preakness. Baffert said he wouldn't be going to Baltimore, with assistant Jimmy Barnes saddling the horses if they run in the second jewel of the Triple Crown.

Preakness officials say they will decide on Medina Spirit's entry after reviewing the facts and pushed the post position draw back to Tuesday afternoon.

Q. WHAT HAPPENS TO PRIZE MONEY IF MEDINA SPIRIT IS DISQUALIFIED?

A. If Medina Spirit is disqualified from the Kentucky Derby, the $1.86 million winner's share of the purse money would go to the owners and trainer of second-place finisher Mandaloun. Dancer's Image in 1968 is the only previous Derby winner to be DQ'ed after the fact for failing a postrace drug test, in that case for the presence of nonsteroidal anti-inflammatory drug phenylbutazone.

Q. WHAT EFFECT WOULD THERE BE ON BETTORS IF THE HORSE IS DISQUALIFIED?

A. Unlike when 2019 Kentucky Derby winner Maximum Security was disqualified for impeding other horses and Country House elevated to first, bettors won't be affected either positively or negatively if Medina Spirit's victory is invalidated.

Because the race was deemed official, no betting money will change hands one way or the other for those who had Medina Spirit or Mandaloun winning the Derby. Never mind the potential payout of what the superfecta would have been for the first four horses to finish: 27-1 Mandaloun, 6-1 Hot Rod Charlie, 3-1 favorite Essential Quality and 42-1 long shot O Besos.