"I would be happy after 50 years for people to look at my art and reflect, and have the same feeling we have now."

Artist David Datuna went viral as the man who ate the $120,000 banana duct-taped to the wall at Art Basel Miami.

"I don't like bananas," Datuna said. "But again, I very enjoyed when I ate this banana."

The Georgia-born artist considered his performance art a message from one artist to another.

Man Who Ate $120K Art Banana Said He Would've Done it Sooner, But Wasn't Hungry Yet 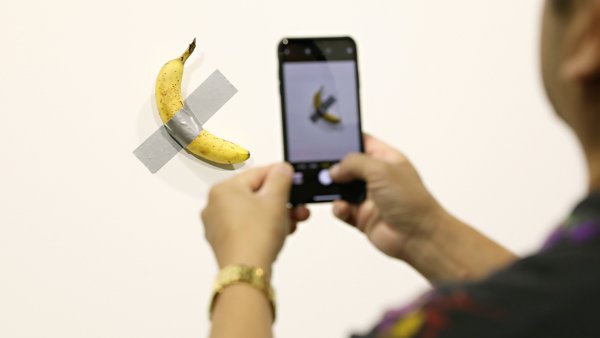 Before the world knew him as the "Hungry Artist," he was best known for his mixed-media sculpture series called "Viewpoint of Millions." He's made sculptures of the flags of the United States, the United Kingdom, France and even Texas out of optical lenses.

If you look closely through the lenses, you can see photographs, newspaper and magazine clippings, all up to your interpretation.

"Lenses are like we are – everyone has a different prescription, a different viewpoint," Datuna said.

The piece of fruit - yes, you read that right - was sold for the large amount during the annual art event on Miami Beach.

His viewpoint now is colored by what he’s going through. Datuna is currently being treated at New York City’s Mount Sinai for stage 4 lung cancer.

"I have no time for fake, just real emotions," he said.

He was first diagnosed with cancer seven years ago and beat it. He says it’s only made his appetite for living stronger.

"When you fight with the cancer for seven years, of course you're more brave. You can do whatever you want, in the right way," Datuna said.

He undergoes chemo every three weeks and doesn't plan to paint himself into a corner anytime soon.

Datuna is already planning an exhibit for the 2020 FIFA World Cup, bringing artificial intelligence technology and art together.

“It's going to be very very, I promise, interesting project, cool and strong," he said.

His innovative, new exhibit will feature 32 flags representing each nation playing in the tournament.

"I would be happy after 50 years for people to look at my art and reflect, and have the same feeling we have now," Datuna said.

The Smithsonian-recognized artist's work can currently be seen at the Metroquadro Art Gallery in Wynwood. The gallery plans to donate the proceeds of his art to the Tisch Cancer Institute at Mount Sinai.