DeSantis signed the package of bills during a news conference at a car dealership in Brandon, Florida on Thursday

Florida Gov. Ron DeSantis has signed into law legislation that cracks down on businesses that require employees be vaccinated against COVID-19.

DeSantis signed the package of bills during a news conference at a car dealership in Brandon, Florida on Thursday, a day after lawmakers in the Republican-controlled statehouse passed the bills. 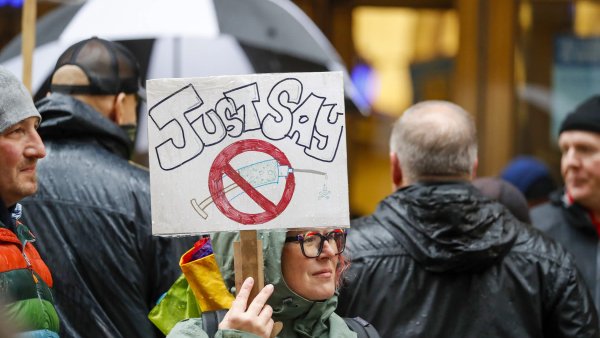 Biden's Vaccine Mandate Will Likely Go to the Supreme Court. Here's How the Courts Have Ruled Before

"Florida is leading, this is the strongest piece of legislation that's been enacted anywhere in the country in this regard," DeSantis said.

DeSantis laughed when asked by a reporter if the bill signing being held in Brandon was a reference to the chants of “Let's go Brandon” that have become a coded stand-in for “F—- Joe Biden” among conservatives.

"I think that Brandon, Florida is a great American city," DeSantis said, as some in the crowd of about 250 supporters chanted “Let's go Brandon.”

The vote Wednesday night capped a short session in which Republicans were all but certain to pass the bills. One measure prevents private businesses from having vaccine mandates unless they allow workers to opt out for medical reasons, religious beliefs, immunity based on a previous infection, regular testing or an agreement to wear protective gear. The state health department, which is led by Surgeon General Dr. Joseph Ladapo, who opposes mandates, will be tasked with defining standards for the exemptions.

The measure also includes fines for businesses that fire a worker without allowing the exemptions. Additionally, it bars schools and governments in the state from having vaccine mandates and allows parents to sue schools with masking requirements. Another bill blocks the public release of records regarding state investigations of vaccine policies in businesses.

DeSantis has said that the bills are necessary to ensure that people are not fired over vaccinations.

"No nurse, no firefighter, no police officer, no trucker, no anybody should lose their job because of these Covid jabs," DeSantis said.

Democrats have repeatedly slammed the legislation as dangerous to the public and burdensome to businesses. They also said the special session amounts to political theater meant to serve DeSantis' political ambitions.

“Does this bill truly attempt to keep Floridians safe, or was it crafted to kick off a presidential campaign for our governor?” asked Rep. Angie Nixon, a Democrat.

Separately, lawmakers passed a bill to stop the state health officer from being able to mandate vaccines during a public health emergency. Republicans also approved a bill directing the state to begin considering a withdrawal from the federal Occupational Safety and Health Administration, which drafted White House vaccine requirements for businesses with more than 100 employees.

Florida — with more than two dozen other GOP-led states, employers and several conservative and business organizations — has sued over the OSHA rule and a federal court has since placed it on hold. The state has also sued over another White House mandate requiring COVID-19 vaccines for federal contractors.