What started as a worry for police and drivers on just the Martin Luther King Jr. holiday weekend has now mushroomed into seeing packs of ATV and off-road bikes popping up almost anytime.

A move is underway that could keep ATV and motorbike riders off the streets and provide them a safe place for their stunts.

It's a possible solution to the dangers and headaches we've seen associated with packs of riders who, at times, take over the streets and highways. It would be music to the ears of thousands of drivers across South Florida, and it would be a delight for many of the motorbike riders, too.

“Honestly, if we had a place to ride and things like that, then I believe that things would be way better,” said one rider, who asked to remain anonymous.

One rider and his group did something that rarely happens and allowed outsiders – in this case, NBC 6 — into their tight-knit unit.

“They try to give us a different image on bike life like it’s bad we ride — we have weapons and stuff — but we ride to take everything in the world off our minds," another man said.

What started as a worry for police and drivers on just the Martin Luther King Jr. holiday weekend has now mushroomed into seeing packs of ATV and off-road bikes popping up almost anytime.

“Like just everybody wanted to come together, like, driving down the street you just see people having fun together. It makes you want to come out and have fun. So, you go and get your own bike out and have fun,” the first rider said.

The danger has grown as the tension between those in the packs and drivers has risen. In October, one rider was shot and killed in Broward County. Three weeks ago, a rider also died from gunfire and another was wounded.

“It’s dangerous, but most of the time we try to conduct things in order like slow down traffic. We try to make people pass and things like that," a rider said. "Sometimes it's the drivers, most of the time they really just like they are impatient sometimes we try to get out their way and they insist on just keep on going."

For the ones out driving while the riders are out, the group asks for motorists to be patient.

"It’ll be done. We will pass by in a couple of minutes. It won’t be that long. So, just be a little patient," the rider said. "We understand we are causing a problem on your end, but we’ll be by. We’re not trying to hurt nobody, get in no accidents, we are trying to make sure everyone makes it home safely.” 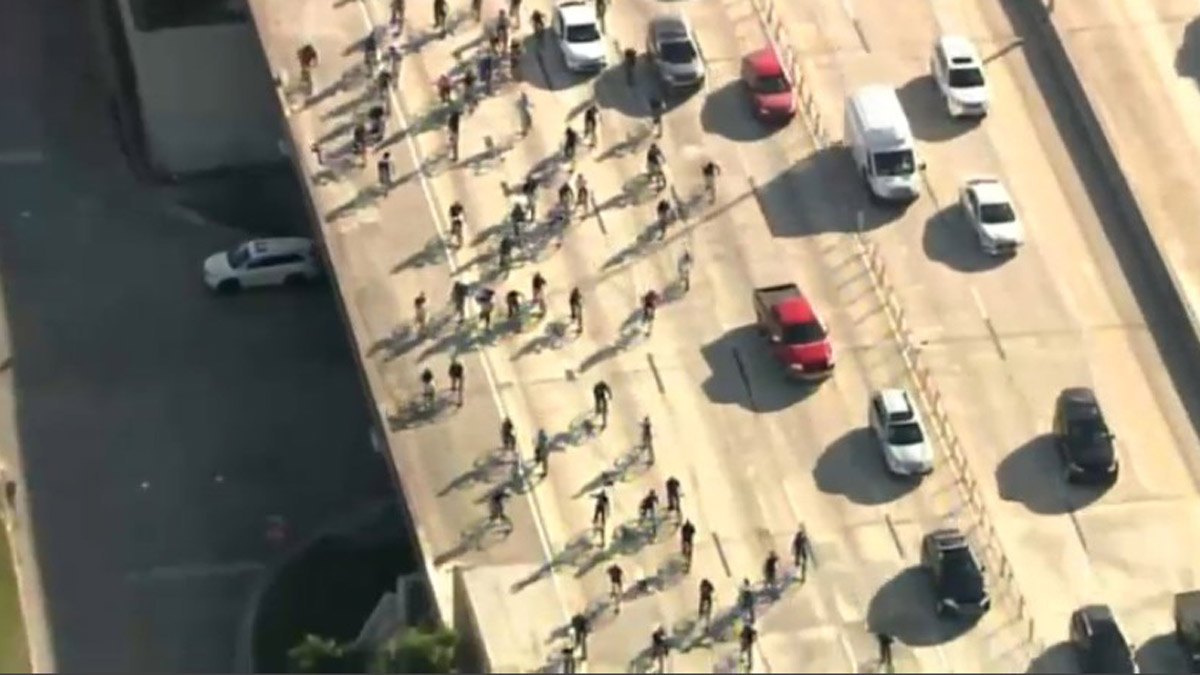 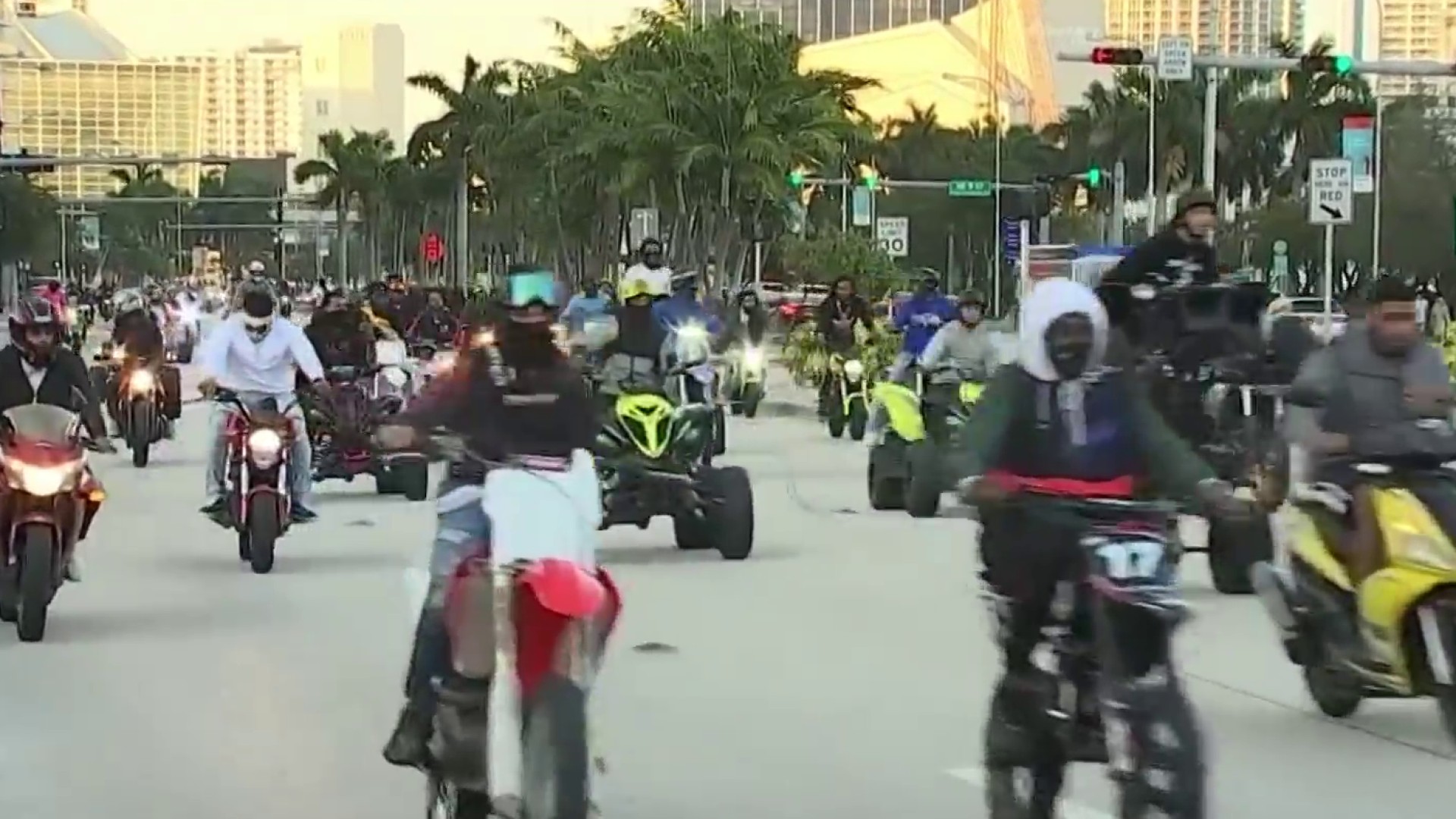 The riders said what they really need are spaces like big, empty lots so that they can all go and ride in large numbers. They said that would keep many of them off the streets.

“It’s not supposed to be legal but really don’t have no place to really ride them,” he said.

NBC 6 has learned there’s a move underway now to find a solution — meetings that may lead to giving the riders a location and drivers safer roads.

Miami Dade’s Interim Police Director George Perez told NBC 6 in a statement, “We have successfully established contact with the organizer who is requesting a meeting with stakeholders to determine how to best organize motorcycle activities in Miami-Dade County. Our staff is coordinating with the Community Relations Board and a collective of other entities so that we may be able to assist the organizer.”

“If they had more spots to where we could be free and open, I guarantee you there would be less people on the streets and stuff because there are more places for us to go," the man said. "We really don’t have nowhere to go. We try to find a little lot, they kick us out. So, it’s like where do you guys want us to go?"

“It ain’t really nowhere to ride like MX and dirt and we find little places like this to hang out, but it be so many of us that we just can’t stay in one place," the second man said. "The police, you know, it's illegal, they probably mess with us or something. So, we hit the streets and we try to keep it as safe and as kosher as we can."

This group says what they’re doing is a movement and a safe legal riding location would help.

"We come together. You feel me? People from different races," the second rider said. "We don’t do no judging. We try to keep all that violence and stuff at a minimum even though we can’t control everybody minds."

The county says it will keep NBC 6 updated as the effort moves ahead. But they will continue as the riders are willing to accept the danger.

“I don’t feel that it’s dangerous. I feel that you should take the safety precautions before you do stuff like this. There’s a lot of things that you would say are dangerous that another person would say would is a daily,” the second rider said. "I feel like it makes the community a lot safer. The youth watch us ... They grow up watching us ride bikes, and they see that's all we do and we have fun and we love it. So, that’s what they want to do and we encourage them to stay in school.”

only on 6Miami-Dade CountyATVsdirt bikes