Janet Hernandez is an activist, fighting for social justice.

Among all the smarty-pants kids at the School for Advanced Studies, a public college prep school, Janet Hernandez leads the pack.

Just don't call her a scientist.

"I'm not a STEM major," Janet, a senior, is telling her friends.

So she's not going to be a STEM major in college, even though she's acing all of her science and math classes. Janet is an activist, fighting for social justice.

"And I hope that I can be an example that with enough work and effort, that our voices can make a difference," Janet said.

She organized a March for our Lives rally after the Parkland massacre, a rally that drew 2,000 people to Tropical Park.

Then Janet got involved with the fight against gun violence in her own community of Richmond Heights.

Meeting with people directly impacted, the victims of violence, Janet has learned about the domino effects of tragedy.

"It's not just one death, it's a mother who's grieving for the rest of their life, it is a son who's gonna grow up without a father," said Janet.

Janet has also worked with politicians from both parties on immigration issues, but her friends know her as the kid who's always there for them.

"Like no matter what is going on, like if I'm going through problems at home or struggling with a test, she always has an uplifting message that makes me feel better," said fellow senior, Charli Fernandez.

"She's just very overwhelmingly a caring person and does everything she can to improve the lives of others," said Bridget Lee, another classmate.

Ask any teacher at the SAS Kendall campus and they'll tell you Janet is brilliant academically, but there's a spirit within her that sets her apart.

"It's her passion that leads her into being a role model for others and kind of shows that drive that when she puts her mind to something she is willing to do whatever she needs to do to accomplish that goal," said Jesica Soria, who teaches AP U.S. History at SAS.

You could say Janet inherited her political activism, her father was a dissident in Cuba, a political prisoner there, so her passion for human rights comes straight from her dad.

"So for me, it's personal," Janet said. "My dad is my biggest cheerleader, I am so lucky to be here in the United States and have those rights and be celebrated for being so involved in politics whereas people in other countries are being imprisoned and killed for trying to stand up against government."

So Janet wants to become a human rights lawyer, but first, she's got her sights set high for college.

Her early-decision choice is Harvard University. Last night she got the word: Harvard accepted her.

Good choice, Harvard, you're lucky to get Janet Hernandez. 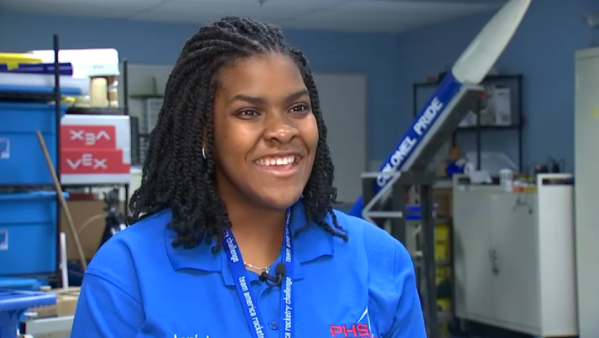