Dan Bauman, 50, has been recording his attempts to get his daughter into Fort Lauderdale High School without a mask

A man who has been attempting to bring his maskless daughter to school was arrested Wednesday for shoving a student while protesting Broward County Public Schools' mandatory mask policy.

His attorney is now asking why the student who started the incident isn’t also facing charges.

Over the past few days, Dan Bauman, 50, has been recording his attempts to get his daughter into Fort Lauderdale High School without a mask. In one video, he's heard telling a school official that his daughter "has a right to go in" and that "this is illegal what you’re doing."

“I don’t care, the school board policy is illegal, and she’s not gonna put on a mask, no matter what, it’s not gonna happen,” Bauman said in a previous interview with NBC 6.

A man who has been attempting to bring his maskless daughter to school was arrested Wednesday for shoving a student while protesting Broward County Public Schools’ mandatory mask policy. NBC 6 investigator Willard Sheppard reports.

Bauman was outside Fort Lauderdale High School once again on Wednesday morning, accompanying his daughter as she tried to enter the gate without a mask.

"Bauman was videotaping other students with his phone and causing a disturbance at the gate," a Fort Lauderdale Police spokesperson said. In an arrest report, Bauman was also described as "known to cause disruption due to protesting the school board's mask policy."

According to the report, a student was heard saying, "I've had enough for four days," and walked up to Bauman. She attempted to grab his cellphone while he was recording. 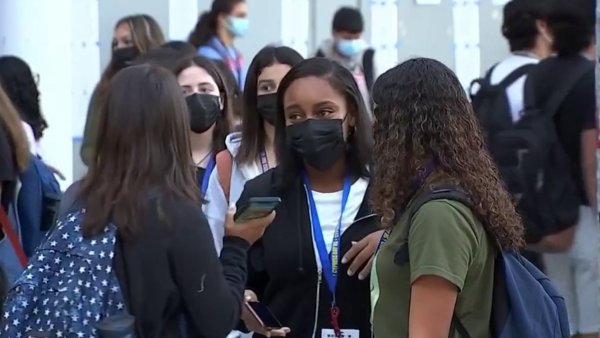 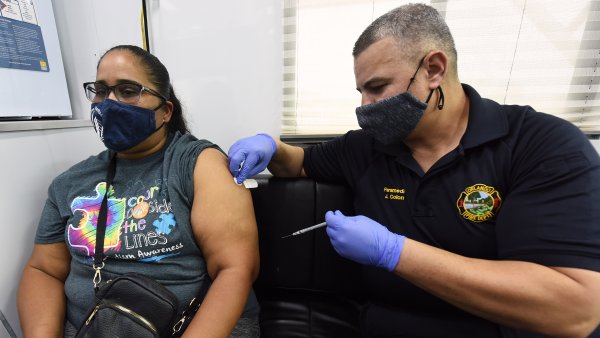 Bauman then pushed the student by the shoulder and grabbed her hand, twisting her arm, Fort Lauderdale police said in the report. An officer and security guard had to pull Bauman away from the student.

His daughter Isabel vented about the arrest on social media

"I think it was planned because of the cops. All the adults were surrounding him, grabbing him as if he was assaulting her,” Isabel said.

Bauman was arrested and charged with child abuse without great bodily harm, according to a complaint affidavit from Fort Lauderdale police. He had been previously charged with aggravated child abuse.

Bauman was booked in Broward County's main jail. He was granted a $5,000 bond and was ordered to stay away from the victim. Bauman is also not allowed to return to the school unless he is permitted.

His lawyer, Corey Strolla, says Bauman was a victim of a robbery by sudden snatching and that he "used absolutely no unnecessary physical force to legally obtain his property back in his rightful possession."

On Tuesday, the Broward County School Board told the Department of Education that it won't back down on its mask policy, which gives parents a medical opt-out for students. The board said parents don’t have an unlimited right to send their kids to school without a mask, adding that it would infringe on the rights of other parents who want their children to be safe.

The state had given Broward and Alachua counties until Tuesday to end their mask mandates. Broward's students began school a week ago with a mask policy in place. State officials have threatened to withhold funding equal to school board salaries if a district doesn’t comply. Those funds make up less than 1% of each district’s budget.

“What we have stated to them is that we do believe that it is an overreach of their authority, that we are legally compliant and we have respectfully requested that they rescind the order,” said interim superintendent Dr. Vickie Cartwright.