A Moment Of Silence, Then Business at Hand in Surfside Lawsuit Hearing

Nearly $50 million in insurance proceeds has been pledged to the victims, but judge says land will have to be sold to help compensate victims

He came to court Friday with a request the judge and all attorneys could agree on: a moment of silence.

"Here we’re talking about financial and I don’t want it to get lost in the shuffle that we’re dealing with lives here and people we care about that are gone," Cytrynbaum said in proposing the silent tribute, which Judge Michael Hanzman promptly granted.

Then to the business at hand, as the receiver Hanzman appointed to stand in for the condo association in the litigation announced, "some developments, positive developments, in the case." 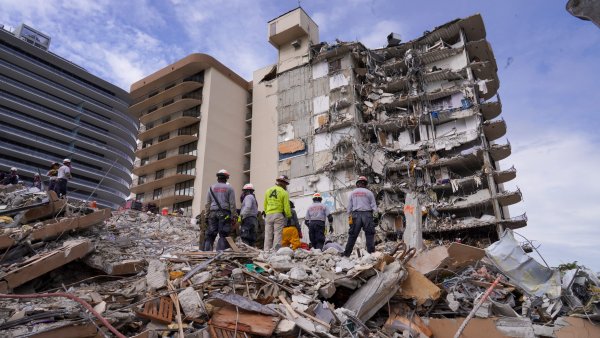 Attorney Michael Goldberg announced Great American Insurance Company had agreed to contribute $31 million -- the entire proceeds of the property insurance policy it wrote on the condo -- to the $18.3 million all the liability insurers already agreed to pay.

But with around 100 dead and 136 homes destroyed, Hanzman said more than that $50 million will be needed to pay claims, and that means the land will be sold at fair market value, perhaps $100 million the receiver had previously suggested.

But, after meeting with survivors and victims Thursday night, Goldberg said there was no unanimity on what to do with the land.

"Some people want it sold and proceeds immediately distributed," he said. "Some want to rebuild on the property and some believe this is hallowed ground" and want it to be a memorial.

Whatever it is going to be, Hanzman said some entity will have to pay what the land and is worth.

The memorial is temporary, but some of the victims’ families are calling for a permanent tribute to be built on the Champlain Towers site. NBC 6's Ari Odzer reports

"The court does not have the authority to nor would it ever allow the victims of this tragedy to shoulder the cost of a memorial," Hanzman said, though he said all options remain open for use of the property, as long as the receiver receives fair market value.

As for recovering funds from more than just the association's insurers, lawyers have their sights on other defendants, including Morabito Consultants, engineers who saw problems in the building two years ago and advised the association to fix them

Also getting a notice of intent to sue, the Town of Surfside, whose former building director then assured owners the building was in good shape.

Among those investigating the cause of the collapse is the National Institute of Standards and Technology, which has been given access to remnants and the site.

It is analyzing concrete and steel and mapping the site to record exactly where evidence was recovered.

Attorneys for both victims and the Town of Surfside asked the judge Friday to consider how they can have access to the remnants and the site, but for now, the judge said no for now.

Miami-Dade police say the material is evidence in an ongoing criminal investigation.