In fiery exchanges, the Democratic rivals attacked each other in Las Vegas when NBC News and MSNBC hosted the ninth debate

Former New York City Mayor Mike Bloomberg, a billionaire who has been advertising heavily against President Donald Trump, took the debate stage for the first time Wednesday in this year's presidential race.

He went up against five Democrats who had already been vying for the chance to oust Trump in November. Those five -- and in particular Sen. Elizabeth Warren of Massachusetts -- greeted him with a series of sharp attacks.

Sen. Bernie Sanders, independent of Vermont is leading the Democrats nationally in an NBC/Wall Street Journal poll released Monday with 27% support. Clustered behind him are former Vice President Joe Biden, who has had disappointing finishes in Iowa and New Hampshire, Bloomberg, Warren and Pete Buttigieg, the former mayor of South Bend, Indiana. Sen. Amy Klobuchar of Minnesota trails despite her third place in New Hampshire.

STOP AND FRISK AND "HORSE-FACED LESBIANS"

Bloomberg was immediately called out by his rivals, Warren in particular, on his record with women and the controversial "stop and frisk" policing policy in effect while he was mayor. A disproportionate number of black and Hispanic New Yorkers were stopped and searched, most of whom had not committed a crime.

Senator Elizabeth Warren goes on the offense during the Nevada Democratic debate, criticizing the other candidates' health care plans.

"I’d like to talk about who we’re running against," Warren said, "a billionaire who calls women fat broads and horse-faced lesbians and no I’m not talking about Donald Trump. I’m talking about Mayor Bloomberg."

The New York Times has reported that workers at Bloomberg's company assembled a book of his sayings that included those comments; he has never admitted to making them.

A Bloomberg spokesman, Stu Loeser, told the Times: "Mike has come to see that some of what he has said is disrespectful and wrong. He believes his words have not always aligned with his values and the way he has led his life."

Women who worked at Bloomberg’s company have filed lawsuits alleging discrimination and accusing Bloomberg of enabling a culture of sexual harassment and a hostile workplace.

Sanders criticized Bloomberg’s policing policies that he said targeted "African-American and Latinos in an outrageous way."

Bloomberg apologized for the policy ahead of his presidential run, acknowledging its disproportionate effect on blacks and Latinos and said that he realized it was wrong. Wednesday night he said that he was embarrassed by the policy, which he argued was intended to cut the 650 murders a year in New York City when he took office. When he realized it had gotten out of control, he cut 95 percent of the stops, he said.

His critics reject his apology, noting the policy was challenged in court. Warren said that he never criticized the policy just the way it turned out while Biden insisted Bloomberg was forced to act by the administration of former President Barack Obama.

"Let's get something straight: the reason that stop and frisk changed is because Barack Obama sent moderators to see what was going on," Biden said. "When we sent them there to say 'this practice has to stop,' the mayor thought it was a terrible idea we send them there."

The Times found that Biden's assertion was mostly false. The policy came to an end after the American Civil Liberties Union issued a report that showed how many stops had been made and lawsuits were filed. A judge appointed a monitor.

And the 95% figure is deceiving, because the stops increased by more than 600% over 10 years, according to FactCheck.org. Bloomberg cherry-picked the numbers, it said.

WHAT'S IN THE NON-DISCLOSURE AGREEMENTS

Bloomberg was asked again about his treatment of women and reports that his company was a hostile workplace for women.

"I have no tolerance for the kind of behavior the #MeToo movement has exposed," he said.

Women in his company earn promotions, hold positions of responsibility and are paid equally with men.

Warren mocked his defense. She characterized it as: "I’ve been nice to some women."

"That just doesn’t cut it," she said.

She challenged Bloomberg to release women from non-disclosure agreements they had signed with his company for sexual harassment and for gender discrimination.

Bloomberg balked and insisted that there were very few non-disclosure agreements though he declined to say how many and maintained that were consensual and not up to him to dissolve.

"None of them accuse me of doing anything, other than they maybe didn’t like a joke I told," he said.

A DO-OVER ON MEXICO

Klobuchar made amends for being unable to name the president of Mexico last week and offered greetings to President Andres Manuel Lopez Obrador, though she stumbled a bit while pronouncing his name.

Senator Amy Klobuchar admitted to the gaffe during the Nevada Democratic Debate, but said forgetting his name doesn’t reflect what she actually knows.

That wasn’t enough for Buttigieg, who noted she was running on her experience in Washington, where she was a member of committees overseeing border security and trade.

Klobuchar was "not able to speak to literally the first thing, the politics" of neighboring Mexico, he said.

"Are you trying to say the I’m dumb?" she responded. "Are you mocking me, Pete?"

"Missing a name all by itself does not indicate that you do not understand what is going on," Warren said.

"MAYOR BLOOMBERG, SHOULD YOU EXIST?"

"I can't speak for all billionaires," Bloomberg answered when asked that question. "All I know is, I've been very lucky, made a lot of money and I'm giving it all away to make this country better."

The question of income inequality has been key to the campaigns of Sanders and Warren, especially, and Sanders was asked what he meant when he said billionaires should not exist.

Sanders said they represented a "grotesque and immoral" distribution of wealth, with Bloomberg owning more wealth than the bottom 125 million Americans.

When Bloomberg said he had worked hard to make his money, Sanders responded that maybe his employees had played some role in his wealth.

Bloomberg argued that the very discussion of throwing out capitalism would help President Trump get reelected.

"We tried that and other countries tried that," Bloomberg said. "It was called communism and it just didn't work."

Sanders responded: "Let’s talk about democratic socialism, not communism, Mr. Bloomberg. That was a cheap shot."

Bloomberg countered one attack on his wealth by noting how many houses Sanders had. 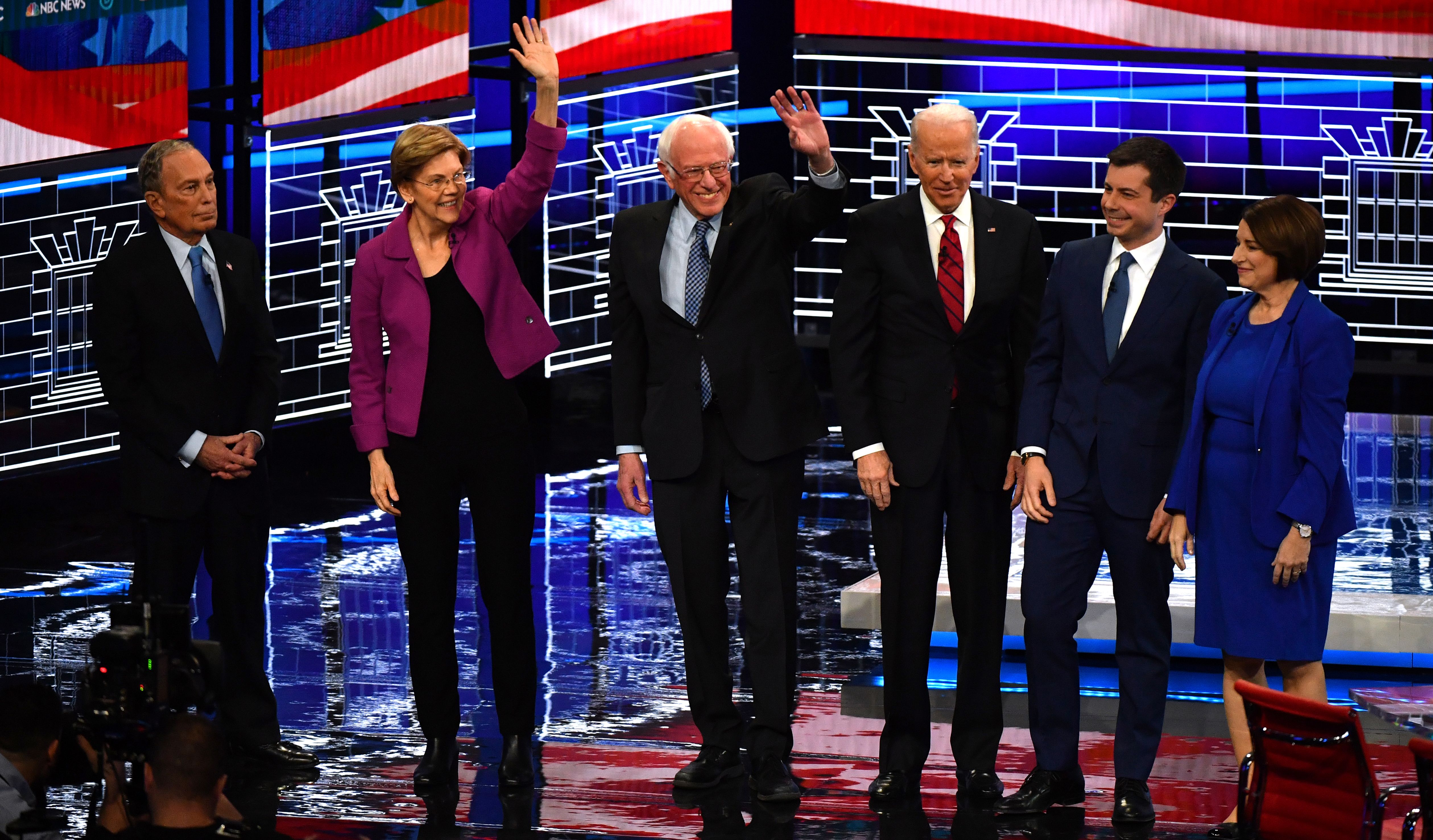 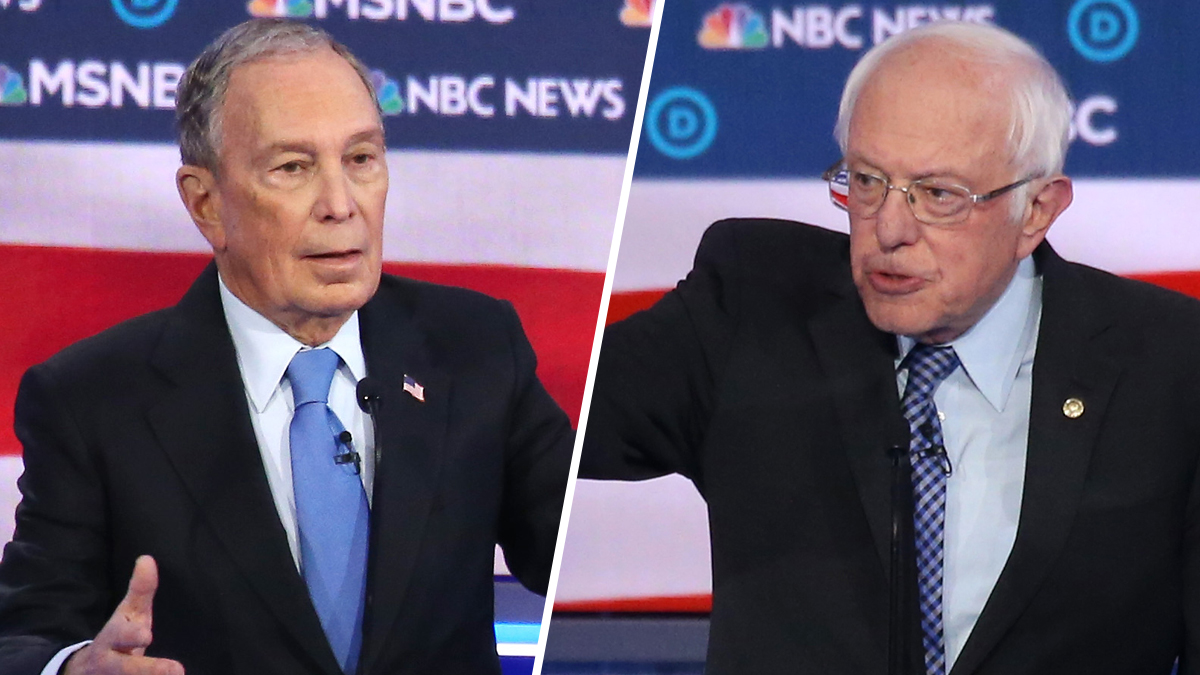 "What a wonderful country we have," he said. "The best known socialist in the country happens to be a millionaire with three houses."

Sanders responded that he lived in Washington D.C., had a house in Vermont and a summer cabin.

"Forgive me for that," he said.

Bloomberg, who mentioned his home in New York City, said he paid all of his taxes, though he had earlier fended off criticism about why he had not yet released his tax returns.

A POST-IT NOTE AND OTHER HEALTH PLAN CRITIQUES

Warren has been knocked for her single-payer, Medicare-for-all plan, which would cost $20.5 trillion over 10 years. To get there by the end of three years, she has proposed expanding public health insurance first.

So when the debate turned to health care, Warren methodically took on her rivals’ plans in one answer, with cameras capturing their reactions as she moved down the line.

Buttigieg’s: "a slogan that was thought up by his consultants to paper over a thin version of a plan that would leave millions of people unable to afford their health care. It's not a plan. It's a PowerPoint.”

Klobuchar’s: "Amy's plan is even less. It's like a Post-it Note: 'Insert plan here.’”

Sanders’: “a good start but instead of expanding and bringing in more people to help, instead his campaign relentlessly attacks everyone who asks a question or tries to fill in details.” Sanders has made his Medicare-for-all plan a signature of his campaign.