Whether it’s online or through the phone, many people looking to file for unemployment benefits tell NBC 6 Responds they are having trouble with the system.

“I’ve tried over and over,” said Christelle Girot Marin, who was recently laid off from her job in the hotel industry.

Sandra Weir said she had spent days trying to reach someone at the Florida Department of Economic Opportunity, also known as DEO, to reset her PIN so she can access the unemployment website and file a claim.

Both women said the process of applying for benefits was a nightmare during an already stressful time.

“It’s beyond frustrating,” Sandra said.  “Honestly, I don’t know how I’m going to eat next week.”

While Sandra said she was having difficulty over the phone, Christelle said she kept getting the same error on the DEO website.

“I understand that there is a high number of applicants on the website, that’s probably why the system is crashing,” Christelle said.  “But I just feel like the situation is not being taken very seriously.” 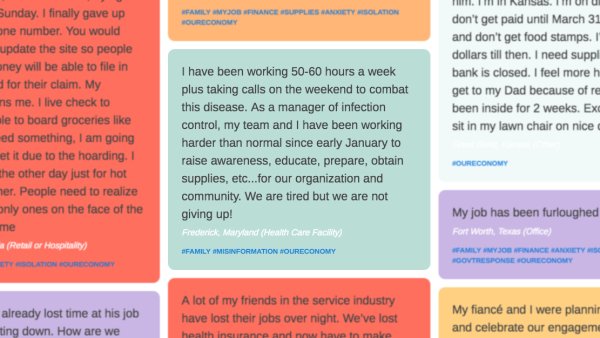 Interactive: How the Coronavirus Has Changed Our Lives

NBC 6 reached out to the DEO about the concerns both viewers shared.  In an email, a spokesperson said, so far this week, more than 130,000 applications had been filed statewide.  The email went on to say: “With this unprecedented event in our state, we are asking everyone to have continued patience” adding that “With increased volume in users, our system is moving slower. Floridians filing for Reemployment Assistance have until Saturday at midnight to file for the week.”

The department also said they are hiring new employees and contractors to help deal with the influx in claims.

“The system was designed to deal with leaks,” said Freddy Perera, a South Florida labor lawyer.  “We don’t have a leak, we have a tsunami.  The bucket was not designed to catch that load.”

Freddy said the statewide unemployment numbers he saw for last week were unprecedented.

“The number roughly is 74,000 last week, which is a record-breaking number,” Freddy said.

Freddy said the impact was especially high in South Florida, where tourism and hospitality are big industries.

“This sector is being pounded,” he said.  “We expect those numbers to grow over the coming weeks.”

While the state works to resolve the issues, Christelle said more needed to be done to provide relief now.

“They need to fix the website, at least the website,” Christelle said.  “If everybody’s able to get on the website then we don’t need to call.”

Christelle said she was also worried about what would happen if she couldn’t get into the system for a while.

“If I can’t apply today or this week and I can only apply three weeks from now, will I be compensated for all the weeks that I’ve missed because of the website not working?” she asked.

Meanwhile, Freddy suggested trying to file a claim online during off-peak hours, maybe even overnight, or calling first thing in the morning, if you’re having trouble getting in now.

The DEO told NBC 6 individuals who are quarantined by a medical professional or a government agency, those who are laid off or sent home without pay for an extended period by their employer because of COVID-19 concerns or those who are caring for an immediate family member who is diagnosed with COVID-19 may be eligible for Reemployment Assistance. The agency also said those whose employment has been impacted but are still receiving wages through paid leave are not eligible to receive Reemployment assistance.

You can file a claim or learn more about eligibility by visiting: FloridaJobs.org.