Florida Highway Patrol officials said Haskins, who had been walking on the highway, was pronounced dead at the scene

Authorities are working to determine what led up to Pittsburgh Steelers quarterback Dwayne Haskins being struck and killed by a dump truck on a South Florida highway, as former teammates and coaches are still coming to terms with the tragedy.

Haskins, 24, was killed early Saturday morning when he was struck by the truck in the westbound lanes of Interstate 595 near the exit for Interstate 95.

Florida Highway Patrol officials said Haskins, who had been walking on the highway, was pronounced dead at the scene.

One witness said he saw Haskins walking on the highway minutes before he was killed. 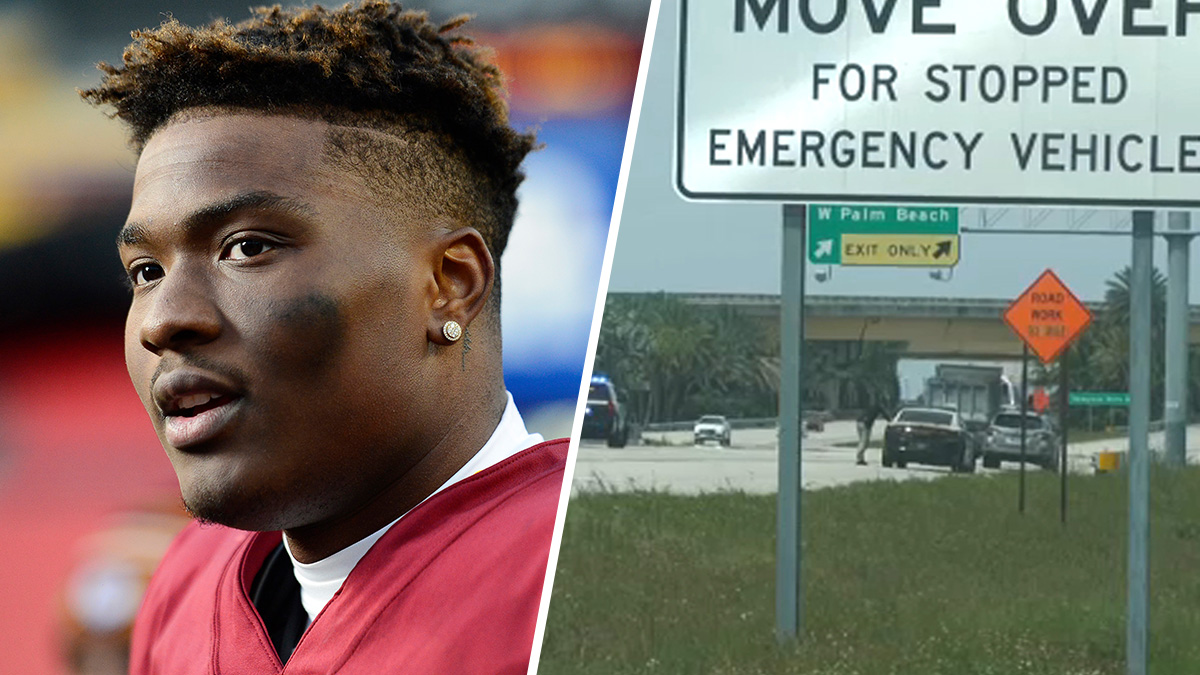 Why was Dwayne Haskins crossing the highway?

It's still unknown why Haskins was walking on the highway, but a traffic homicide investigation is underway.

FHP officials said it could take up to 90 days for more information in the case to be released.

Haskins was in South Florida this week with several teammates, getting ready to compete for a starting job.

A 2019 first-round draft pick by Washington, Haskins was released by the team after going 3-10 over two seasons. He was signed by Pittsburgh as a developmental QB, but he didn't appear in a game last season.

NFL players and teams react to the death of Dwayne Haskins

Haskins' death sparked an outpouring of grief from multiple corners of the NFL, particularly from former teammates with the Steelers and Commanders.

“I am devastated and at a loss for words with the unfortunate passing of Dwayne Haskins,” Steelers coach Mike Tomlin said. “He quickly became part of our Steelers family upon his arrival in Pittsburgh and was one of our hardest workers, both on the field and in our community. Dwayne was a great teammate, but even more so a tremendous friend to so many. I am truly heartbroken.

“Our thoughts and prayers are with his wife, Kalabrya, and his entire family during this difficult time.”

“Dwayne was a talented young man who had a long life ahead of him,” Rivera said in a release. "This is a very sad time and I am honestly at a loss for words. I know I speak for the rest of our team in saying he will be sorely missed. Our entire team is sending our heartfelt condolences and thoughts and prayers to the Haskins family at this time.”

Ohio State posted a photo of Haskins on its Twitter feed, topped by the description “Leader. Legend. Forever a Buckeye."

At Ohio State, Haskins set single-season records for touchdowns passing with 50 and yards passing with 4,831. He was the 2019 Rose Bowl MVP as the Buckeyes went 13-1.

Ohio State coach Ryan Day, who was the quarterbacks coach during Haskins' final season at the school, called Haskins' death “beyond tragic.”

“For those who knew him closely, he was much more than a great football player,” Day posted on Twitter. “He had a giant heart, old soul and an infectious smile. The Ohio State community and our entire football program are heartbroken.”

The Steelers gave Haskins a chance to resurrect his career in January 2021 when they signed him a month after being released by Washington. Humbled by the decision, Haskins stressed he was eager to work hard and absorb as much as he could from Ben Roethlisberger and Mason Rudolph.

"He came to work everyday with a smile on his face and energy and love in his heart," Roethlisberger said in a statement about Haskins. "I really enjoyed his passion and love for the game and wanting to learn and be the best. His smile and zeal for life will be missed!"

Haskins made the roster as the third-stringer but only dressed once, serving as the backup in a tie with Detroit after Roethlisberger was placed into the COVID-19 protocol the night before the game.

“The world lost a great person today,” Steelers star T.J. Watt posted on Twitter. “When Dwayne first walked into the locker room I could tell he was an upbeat guy. He was always making people smile, never taking life for granted.”

Tomlin and general manager Kevin Colbert both praised Haskins for his improvement since joining the team, and the Steelers re-signed him to a one-year deal as a restricted free agent in March.

“Dwayne meant so much to so many people,” Steelers defensive lineman Cameron Heyward posted on Twitter. “His smile was infectious and he was a guy you wanted to be around. We are all in shock about losing him. We are going to miss the heck out of him as well. We lost you way too early. Luckily I got a chance to get to know you. RIP DH.”