We have been covering the impacts of COVID-19 for months, and as you would expect, the virus has impacted us at NBC 6, too.

NBC 6 investigative reporter Phil Prazan is sharing his story with NBC 6 anchor Sheli Muñiz about his fight with the virus. 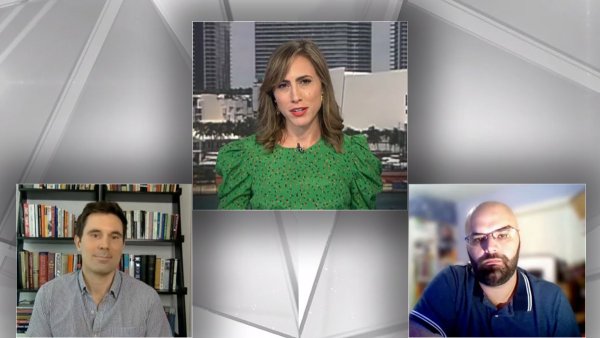 ‘So Much We Don't Know': Doctor on NBC 6 Employees' Different Experiences With Virus

SHELI: Phil, How are you feeling?

PHIL: Right now, I’m feeling fine. I mean, the first two or three days were the roughest, but it’s been better and better every day and now I feel like I can get back into the world.

SHELI: You finally tested negative after about 3.5 weeks. Talk to us about your symptoms and what they were like.

PHIL: So Saturday morning, a couple of weeks ago, I woke up and I just felt exhausted. I had muscle aches and I would get up walk around and do things for about an hour and would have to take about an hour and half nap after that. And I never get sick and I am pretty healthy, and so I knew right away something was wrong and different. You know, I never had a fever, I never had a serious cough, I never had chest pains, never had a headache. It was just exhaustion.

SHELI: It just manifests itself in such different ways for us all. As an investigative reporter, you have been covering this and the issues with testing. How was your experience with testing?

PHIL: My experience with testing was very complicated. So the first day that Saturday, I went and got tested and I did one of those blood antibody rapid tests advertised that they could detect the live virus. That came back actually negative. I also went stood in line and did the nasal swab test. Those results came back three, four days later and that showed that I was positive.

After several people at NBC 6 tested positive for COVID-19, a local doctor is weighing in on what we do know and still don't know about the virus.

SHELI: You tell a lot of stories. What do you want people to know about the virus through your story and your personal experience?

PHIL: I think my big takeaway is that it is going to drastically change your life. You know I’m a healthy person, I’m young. The best-case scenario you’re just going to upend your life for 3-4 weeks. The worst-case scenario is that you can die. People are dying over this virus. I mean, so take it seriously.

Phil said even after he had no symptoms, he was still testing positive. He has since tested negative twice and able to return to work fully.