Two people were arrested Friday in connection with a shooting incident that killed a South Florida pastor last month. 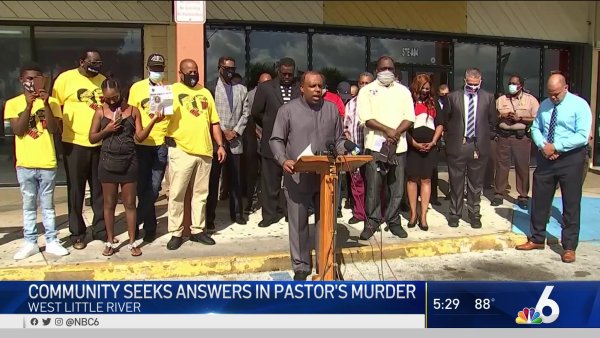 Pastor Killed in Shooting Near Flea Market in NW Miami-Dade

Police said Roberson and Bell had ambushed four victims and started shooting in a crowded parking lot near the Village Flea Market and Mall in the area of Northwest 27th Avenue and 79th Street in West Little River.

One of the gunshots hit a man who was later identified as Boyd. He was taken to Jackson Memorial Hospital's Ryder Trauma Center, where he later died from his injuries.

Many gathered in a vigil for late pastor Gregory Boyd, who was killed while caught in this crossfire at the very place his family and community gathered to honor his life.

The shooting incident was caught on camera. Miami-Dade County Homicide Bureau detectives also received tips from the community that helped in the case, officials said.

Police said they're still searching for another suspect in connection with the shooting.

Family and clergy members had been calling for justice for Boyd, who was known to many in the community and had served at New Birth Harvest Outreach Ministries.

“Pastor Boyd, he was a genuine guy. He was about doing the right thing. We need to stop the killing and stop the shooting in this town and it’s time we need to come to grips on this," said Pastor Lorenzo Johnson Sr., with Faith Tabernacle Baptist Church.

"Hopefully the message will be sent out to people who shoot guns recklessly into a crowded area you can’t do that. This pastor had nothing to do with the beef that was taking place," said Pastor Richard Paul Dunn, with Faith Community Baptist Church.