Miami Beach voters will decide this November whether to stop the sale of alcohol at 2 a.m., moving last call at bars and clubs up from 5 a.m.

South Beach nightclubs will put up hundreds of thousands of dollars to stop a ballot referendum. They face off against the political teams and supporters of the current and former mayor, who hope voters limit partying hours.

The measure on the ballot in November is non-binding but would be a clear sign of public opinion to the city commission. The nightlife on South Beach generates millions of dollars and employs a few thousand people. It also brings crowds, rowdiness, and crime, disturbing neighborhoods on the barrier island.

Right now, the business groups have the upper hand when it comes to campaign funding.

“Citizens for a Safe Miami Beach” has organized protests and paid for ads urging voters to vote no in November. 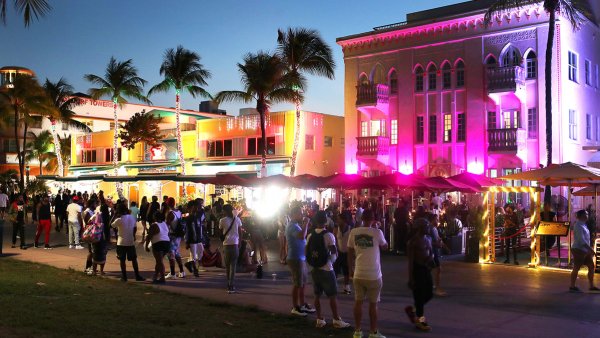 Economic Impacts of Closing Time: Two Vastly Different Studies On Each Side of the Issue in Miami Beach 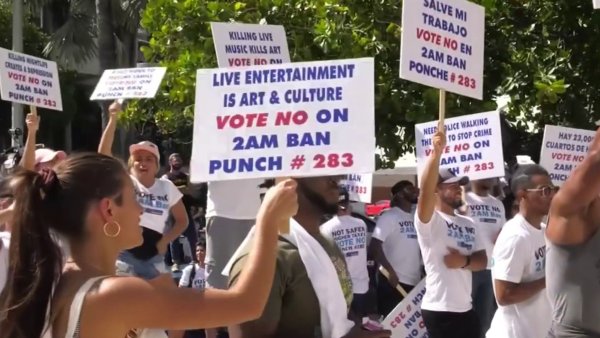 Demonstrators Urge a Vote Against Miami Beach Proposal to Shut Down Bars at 2 a.m.

According to campaign finance documents, the group has raised $275,000 from major businesses in Miami Beach: Mango’s Tropical Cafe and the owners of the Clevelander Hotel and Twist nightclub.

Alex Ruiz owns Salsa Mia and is one of the businesses supporting the vote-No group.

The vote-No side claims businesses in Miami Beach have not yet recovered from the COVID-19 pandemic and this could lead to lost jobs.

Miami Beach Chamber of Commerce is a vote-No ally and paid for an economic impact study stating more than 4,100 jobs and $227 million are on the line.

Currently, the vote-No side has more than ten times the amount of contributions than the vote-Yes side, according to city campaign finance documents. However, former Mayor Philip Levine and current Mayor Dan Gelber are seasoned fundraisers and will likely have more contributions listed on their next report due next week.

Homeowner groups looking for a more peaceful quality of life have pressured city elected officials to try and limit disorder on many weekends and holidays.

Gelber also frequently talks about the issue while he campaigns for reelection, his race also being on the November ballot.

“There’s no reason why our residents have to be held captive essentially to a business model of a few Ocean Drive operators,” Gelber told NBC 6 earlier in the week.

The entity supporting the vote-Yes side with Gelber and Levine is called “Yes for a Safer Miami Beach.”

So far "Yes for a Safer Miami Beach” has raised $25,000, donated by a state political committee called New Leadership for Florida, which is run by longtime Gelber consultant Christian Ulvert.

While the latest donations in the state political committee are from the summer, the vote-Yes team expects more donations to come in.

Ulvert wrote to NBC 6 their donors are “community leaders, residents and businesses who share the same commitment to transform the entertainment district into an Art Deco District. All donors are disclosed in our reports, and you will see more leaders step up to fight the misinformation the other side is spreading to voters,” Ulvert wrote to NBC 6.

For the vote-Yes team, the notable increase in crime on South Beach over the years has drained too many resources. They point specifically to a city analysis stating the city loses around $6.4 million a year on law enforcement costs in the area.

A similar effort to move the last call to 2 a.m. failed in 2017 under then-Mayor Levine. Residents voted down the idea with 65% of the vote.

The election is Nov. 2 and here is a sample ballot.